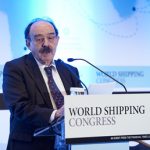 Dr Nicolaos Litinas is Emeritus Professor at the Department of Shipping, Trade and Transport, University of the Aegean. He received, from the Massachusetts Institute of Technology (MIT), a Doctor of Science degree (1980), and two Master of Science degrees (1976, in Naval Architecture and Marine Engineering and in Shipping and Shipbuilding Management). Before his graduate studies he served, for 8 years, as an engineer naval officer in the Greek Navy (top2nd in his class), and worked for 2 years as a superintendent engineer in a large Greek Shipping Company. After his postdoctoral work at MIT he returned in Greece and held the positions of General Coordinator in Athens Transportation Organization (1981-82), Vice President of Piraeus Port Authority (1982-84), and President of EEGE a small shipbuilding company. Also, he was appointed, as special advisor and special secretary at the Ministry of National Economy (1982-85) and at the Ministry of Industry (1985-86). From January 2011 to June 2012 Dr Litinas was appointed and served as General Secretary of Shipping at the Greek Ministryof Shipping. During the period of 1986 to 2009, Dr. Litinas has served as President of the Department of Business Administration, President of the Department of Shipping, Trade and Transport, President of the Dean Council of the School of Management and Vice Rector of the University. His teaching experience focuses on Strategic Management, Business Management and Organization, Policy and Decision Analysis and Data, Models and Decision with emphasis in Transportation systems. His research activities are focusing on Transportation Systems Policy Analysis, Strategic Management, Business Restructuring CSR, and new ICT Technologies. He is involved in extensive international research activities, including the participation as basic researcher and in most cases as scientific coordinator, at more than 40 Research Programs. In addition he has served as the scientific director of a EU-US cooperation program (URIT) and is one of the founders for the creation of TRANSPORTNET, a network of 8 famous European Universities aiming at the cooperation in teaching activities (e.g. Marie Curie programs). Dr Litinas’contribution to the scientific community amounts to more than 100 scientific pieces of work related to the above subjects and activities, published in international scientific journals or presented in international conferences.