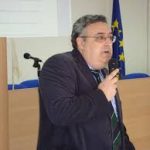 Dr. Evangelos Xideas is Professor of Applied Economics at the Department of Shipping Trade and Transport of the University of the Aegean. He received his B.A. and M.A. degrees in economics and economic policy from the Athens University of Economics and Business in 1982 and 1984 respectively. In 1987, he received his Ph.D. from Loughborough University of Technology, U.K. in Economics. Since 1990, he has taught Microeconomic Theory, Econometrics, Transport Economics, Maritime Economics and Macroeconomics at the Business School of the University of the Aegean, first at the Dept. of Business Administration (1990-2001) and from 2001 up to day at the Dept. of Shipping Trade and Transport. During the 1995-1999 period, he was also scientific researcher at the Center of Planning and Economic Research in Athens.He has served as the first Dean of the Business School (2002-2006) and Head of the Department of Shipping, Trade and Transport (2010-2012). He has published number of articles in the areas of Migration Theory, Procurement Management, Transport Economics, Maritime Economics and Finance in Journals such as Journal of Business Research, European Journal of Marketing, International Migration Quarterly Review, Journal of Transport and Shipping, Studies in Regional and Urban Planning, European Research Studies, Journal of European Economy. He has published two books and three monographs. He has also participated in a significant number of national and international research projects. He is member of the Hellenic Association of Maritime Economists, of the Hellenic Financial and Accounting Association and of Economic Chamber of Greece.His present research interests include Transportation Economics, Maritime Economics, Short Sea-Shipping, Modeling Shipping Markets, Regional Economics, Econometric Applications on Transportation, Economics of Telecommunications, Modeling Migration Flows, Purchasing Management.Today, he teaches Econometrics, Microeconomics, Macroeconomics and Applied Econometrics